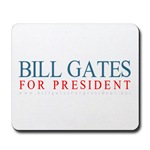 Thanks for visiting our webpage. We’re always working hard on its expansion, but since we realize that our message can only be considered serious if we explain who we are and why we’re doing this, we decided to create this ‘about’ page that will try to do just that.

Bill Gates for President dot net is a movement of people from all over the world who share a set of beliefs. These beliefs are:

These common grounds are shared by all the people working on and supporting Bill Gates for President dot net. They are general, and there aren’t too many. The reason for this is simple: we know Bill Gates isn’t the perfect man. However, we believe he probably fits the profile we’re looking for closer than anyone else. We are not Republicans. We are not Democrats.

Please don’t write this website off as a joke. We are serious. We’re not trying to make fun of Bill Gates what so ever. This website is made with the greatest respect for Bill and everything he has accomplished. We would also like to point out that we are not affiliated with Bill Gates in any way. We do this because we believe in Bill, nothing more, nothing less.

Thanks for helping to keep our website alive for all these years: